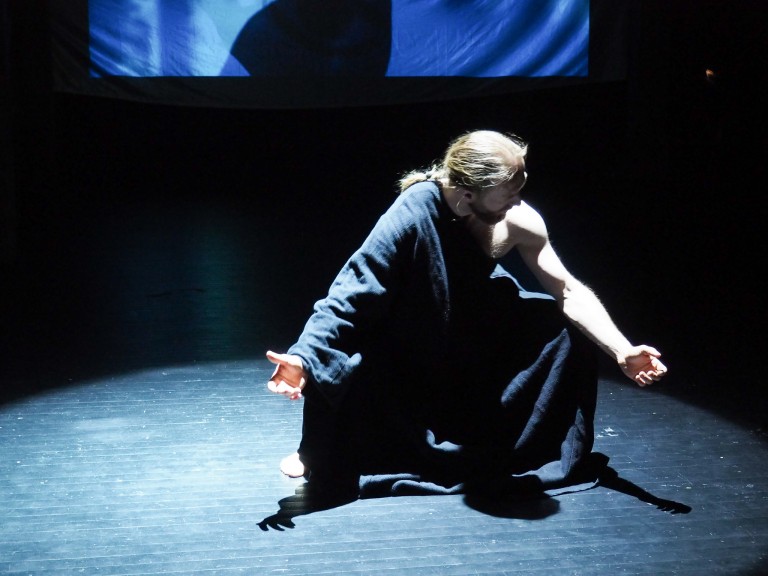 Either put on these glasses..or start eating that trash can (working title)

Dance artists Matti Haaponiemi and Anders Lillhonga present a work that is a multidimensional, improvisatory deep dive into the common pool of dance and combat skills, and from this pool only one rises as a winner!... or rises one?

The work combines in a fresh and surprising way the following elements: action movie heros from childhood, pop-culture, computer games, and the mysticism, aesthetics and pseudo-science of martial arts.

In the center of the artistic work is the ground between dance and combat improvisation. The work not only contemplates on a clear physical dimension, but it reflects cultural demands of manhood that emphasize toughness, aggressiveness, admiration of violence, individualism, 'making it' all by oneself, lack of emotions, and competitiveness of being physically competent and virile. It ponders upon the positive dimensions of manliness and masculinity and reflects the artists' own stance to manhood.

The performance happens on the International Dance Day on Wednesday the 29th of April at 6 pm.

Anders Lillhonga is a dance and performance artist from Kokkola. He is a devoted budo hobbyist. He graduated as a dancer from Riveria (Outokumpu) in 2018, and has ever since worked as a freelancing artist in different kinds of projects nation wide.

In his own artistic work he is interested in minimalism, improvisation, acrobacy, airiness of movement, different ways to 'communicate movement' and interdiciplinary ways to create works that are interesting to both himself as well as the public.

Matti Haaponiemi got excited about dance when he had already grown up. His basis for movement comes from the world of wrestling, from Greco-Roman style. In 2011 he got to know contact improvisation that lead him towards contemporary dance. Besides his interest in contact improvisation, he does movement research and applies martial arts in dance. He's also into teaching.

Haaponiemi has a practice that is collected from many different elements, such as authentic movement, franklin method, feldenkrais method, contact improvisation, taiji, qigong, capoiera, aikido, axis syllabus and the Finnish contemporary dance scene.