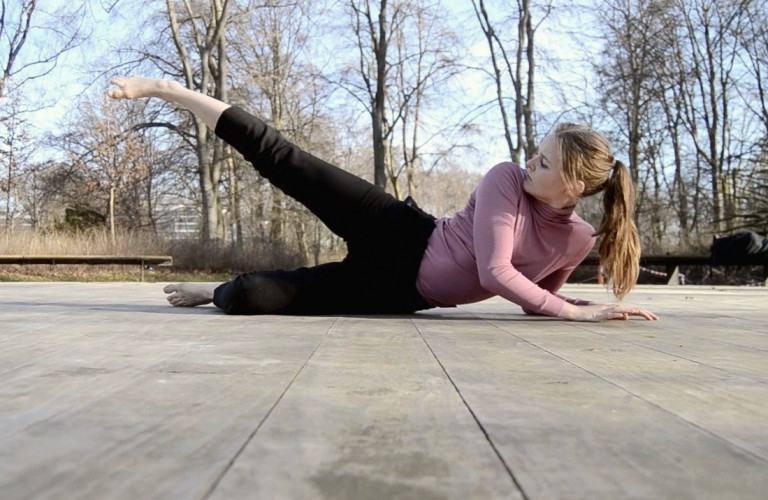 KONTRA is a dance solo investigating the state of being in control - or the lack thereof.
With our complex brain and nervous system that binds the whole body together, we humans are able to control our body's movements and this opens up countless possibilities to us.
What would happen if each body part were able to control itself and had a will of its own?

In KONTRA, Cecilie Schyth Kjær creates a scenario in which her body parts take over and thus decide where she walks and how she moves through space. KONTRA portrays the peculiar conflict between an autonomous body and a dancer's attempt to regain control over it.

Cecilie Schyth Kjær is a Danish dancer, choreographer and collaborator. Besides taking part in various productions and researches, she creates her own work in collaboration with other young performers. She values creating from a conceptual starting point and is at the moment fascinated by the countless possibilities that the human body offers. This fascination has triggered her into an ongoing exploration of how the body can act as a vessel to create versatile images and expressions.

Cecilie’s journey in movement began in the world of gymnastics and a while later she discovered how dance unfolds endless possibilities in movement and expression. This brought her to the Royal Ballet School in Odense, whereafter she decided to pursue dance professionally.

She graduated from Artez University of the Arts in Arnhem, The Netherlands in 2019 where she took a liking to physical techniques as floor work and partnering.
Cecilie is now freelancing in Copenhagen and abroad. Aside from her base in the Danish capital, she still has a strong connection to the Dutch dance scene and works there from time to time. Besides her own artistic work, she has worked with choreographers such as Antoinette Helbing, Ian Yves Ancheta, Det Fynske Dansekompagni and has been assistant choreographer for Roser López Espinosa.